Twice we are specially told that the unclean spirits know our Lord. In one place it says, “they knew Him.” to another, the devil cries out, “I know you who you are, the Holy One of God.” They knew Christ, when Scribes were ignorant of Him, and Pharisees would not acknowledge Him. And yet their knowledge was not unto salvation. 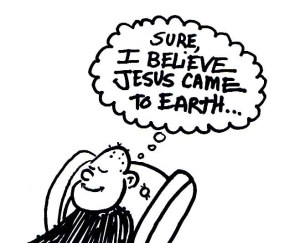 The mere belief of the facts and doctrines of Christianity will never save our souls. Such belief is no better than the belief of devils. They all believe and know that Jesus is the Christ. They believe that he will one day judge the world, and cast them down to endless torment in hell. It is a solemn and sorrowful thought, that on these points some professing Christians have even less faith than the devil. There are some who doubt the reality of hell and the eternity of punishment. Such doubts as these find no place except in the hearts of self-willed men and women. There is no infidelity among devils. “They believe and tremble.” (James 2:19.)

Let us take heed that our faith be a faith of the heart as well as of the head. Let us see that our knowledge has a sanctifying influence on our affections and our lives. Let us not only know Christ but love Him, from a sense of actual benefit received from Him. Let us not only believe that he is the Son of God and the Savior of the world, but rejoice in Him, and cleave to Him with purpose of heart. Let us not only be acquainted with Him by the hearing of the ear, but by daily personal application to Him for mercy and grace. “The life of Christianity,” says Luther, “consists in possessive pronouns.” It is one thing to say “Christ is a Savior.” It is quite another to say “He is my Savior and my Lord.” The devil can say the first. The true Christian alone can say the second.