Think of Christmas carols and songs, especially the ones people like to sing the most, and the people and events surrounding Jesus’ birth. We sing of angels, shepherds, Mary and Joseph, the stable, Bethlehem, Wise Men, and all the familiar details. How often do we really think about the doctrine or theology of Jesus’ birth? Maybe if we hear a sermon on Sunday, or read the “Christmas passages” in the Bible, then we give it some thought.

I challenge you, in the midst of the hurry and worry of this season, to see with new eyes the wonderful and rich symbols and images in the Christmas songs and hymns.   Look for doctrinal references and teachings of the Incarnation. It’s interesting to pull out these kernels of incarnational theology found in the hymns.  For instance: 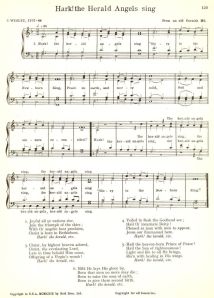 “Glory to the new-born King;

Peace on earth, and mercy mild,

Join the triumph of the skies.

“Christ is born in Bethlehem!”

“Glory to the new-born King.”

Late in time behold Him come,

Off-spring of a Virgin’s womb

Veiled in flesh the Godhead see,

Pleased as Man with men to dwell,

“Glory to the New-born king!”

Hail the heav’n-born Prince of Peace,

Hail, the Sun of Righteousness

Light and life to all He brings,

Risen with healing in His Wings.

Now He lays His Glory by,

Born that man no more may die

Born to raise the sons of earth,

Born to give them second birth.

“Glory to the New-born king!”

The Incarnation is such a mystery!  This doctrine teaches that the entire nature and work of God took on human form in the person of Jesus. Jesus was at the same time fully human and fully divine.

In Latin, the term caro or carnis means “meat” or “flesh” (as in chili con carne…chili with meat) So by “incarnation”, Christians mean that God the Son, Jesus, fully God, was joined to human flesh or human nature.  Fully God becoming fully man.  The word “incarnation” does not appear in the New Testament, but the idea or concept is found in many places.

This Christmas, don’t just sing the words to the familiar hymns.  Think of the deep, rich meaning behind the words.  Be awed by the Incarnation!  Here is a quote from J.I Packer, from  “Knowing God”, Chapter 5:

The WORD had become flesh: a real human baby.  He had not ceased to be God; he was no less God than before; but he had begun to be man.  He was not now God minus some elements of his deity, but God plus all that he had made his own by taking manhood to himself.  He who made man was now learning what it felt like to be man.  He who made the angel who became the devil was now in a state in which he could be tempted—could not, indeed, avoid being tempted—by the devil; and the perfection of his human life was achieved only by conflict with the devil.  The epistle to the Hebrews, looking up to Him in his ascended glory, draws great comfort from this fact…

The mystery of the Incarnation is unfathomable.  Perhaps is has never been formulated better than in the words of the Athanasian Creed.  “Our Lord Jesus Christ, the Son of God, is God and man…perfect God, and perfect man…who although He be God and man, yet He is not two, but one Christ; one, not by conversion of the Godhead into flesh: but by taking of the manhood into God”  Our minds cannot get beyond this.  What we see in the manger is, in Charles Wesley’s words,

Our God contracted to a span;

Incomprehensibly.  We shall be wise to remember this, to shun speculation and contentedly to adore.

One thought on “Veiled in flesh the Godhead see,Hail, the incarnate deity….”