Having just celebrated Jesus’ death and resurrection, it is exciting to have passages of Scripture that point us to Christ.  Sometimes verses jump right off the page at us, even though we have read it before and didn’t see it.  Such was the case when I first read about the cities of refuge.  But in my research, I came across this insight from Kim Riddlebarger, senior pastor of Christ Reformed Church in Anaheim, California, and visiting professor of systematic theology at Westminster  Seminary California. He is also a co-host of the White Horse Inn radio program, which is broadcast weekly on more than fifty radio stations. 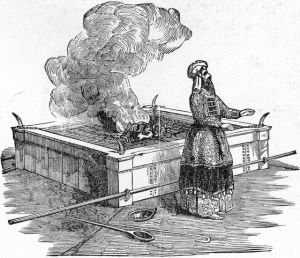 While in chapters 13-21, we have the legal record of Joshua dividing the land among the tribes of Israel in fulfillment of God’s promise to his people, in chapter 20, we read of Joshua establishing the six “cities of refuge” which provided legal protection for anyone who accidentally took the life of another–in modern parlance this is known as manslaughter or negligent homicide.  Since nothing in redemptive history is accidental, with the establishment of these six cities, we are pointed ahead to Jesus Christ–the great high priest. In the case of someone who commits manslaughter, they must flee to one of these cities of refuge and remain there until the death of the high priest. The symbolism here is obvious and powerful.

Clearly, the death of the high priest in a symbolic sense sets the man-slaughterer free.  This points us ahead to the death of Jesus, who is both the great high priest and at the same time the divinely appointed once for all sacrifice for sin. That God provides for relief from sins such as manslaughter is a good thing and demonstrates that even though Israel was under the blessing-curse principle based upon the covenant God made them at Mount Sinai, the covenant of grace (first made with Abraham) was never annulled, and still remained in force, ensuring the salvation of believers within Israel.  It was Jesus after all who said that anyone who was angry with his brother or sister was just as guilty of murder as the one who actually took life (Matthew 5:21-22).  Therefore, as the death of the priest in one of the cities of refuge allows the manslaughterer to go free, so too the death of Jesus frees us from the guilt of our sins, including the hatred of our neighbor.  With images like this found throughout the Book of Joshua, we are  reminded that the Canaanites were not Israel’s greatest enemy–sin and it wages are our greatest foe. And now, the greater Joshua (Jesus) has defeated both sin and death.

To read more of his comments, or to go to the sermon on Joshua 20-21, click here:

One thought on “Cities of Refuge Point to Christ, Our Great High Priest”