John 4:6-9  Jacob’s well was there; so Jesus, wearied as he was from his journey, was sitting beside the well. It was about the sixth hour.  A woman from Samaria came to draw water. Jesus said to her, “Give me a drink.”  (For his disciples had gone away into the city to buy food.) The Samaritan woman said to him, “How is it that you, a Jew, ask for a drink from me, a woman of Samaria?” (For Jews have no dealings with Samaritans.)

John Piper, in a sermon “You Will Never Be Thirsty Again” 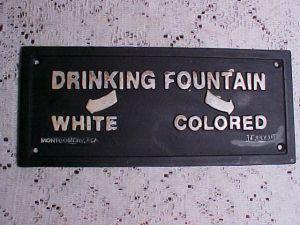 To feel the force of what Jesus did in verses 6-8, it might help to compare it to the racial situation in my hometown 50 years ago. In Walgreens and Kresses and Woolworths, there were two water fountains on the wall with signs over them: “White” and “Colored.” You can scarcely imagine anything more demeaning than to build your entire plumbing system around the unwillingness to drink from the same fountain. What do you tell the children when they ask why?

But That Isn’t Done

There was one fountain in Sychar. And the sign over it said, “Colored—Samaritan.” Verses 6–8 say,

Jacob’s well was there; so Jesus, wearied as he was from his journey, was sitting beside the well [literally “on the well”]. It was about the sixth hour [noon]. A woman from Samaria came to draw water. Jesus said to her, “Give me a drink.” (For his disciples had gone away into the city to buy food.)

Notice what he did. First, he went through Samaria. Second, he sent the disciples to buy food (presumably touched and prepared by unclean Samaritans) so that he could be alone. They didn’t all have to go. Third, he sat on the well to be fully conspicuous and unavoidable. Fourth, he asked a woman—whom he knew was an unclean, impure, heretical, disreputable Samaritan—for a drink. Not for permission to get a drink, but for a drink from her bucket.

He is standing by the fountain marked “Colored” watching a black woman fill her water bottle and then, for all to see, says, “Can I have a drink from your water bottle?” She says, at the end of verse 9, “Jews have no dealings with Samaritans.” But more literally it says, Jews don’t “use together” with Samaritans. You can’t be asking me to use the same bucket. That isn’t done.

Jesus is pursuing this unacceptable relationship. God is pursuing this woman. He means to have her in heaven. This is graciously relational. Everything is intentional. This is not just happening. This is design. “God did not send his Son into the world to condemn the world, but in order that the world might be saved through him” (John 3:17).

He broke a centuries-old taboo. He sought to be alone in Samaria. He sat on the well. He spoke and did not remain silent. He spoke to a Samaritan. He spoke to a woman. He spoke to an adulteress. He asked for a drink. And the only vessel available was hers. “We have seen his glory, glory as of the only Son from the Father, full of grace and truth. . . . And from his fullness we—WE proud, angry, critical, lustful, greedy, worldly, lazy, fearful, unrelational . . . WE—have all received, grace upon grace.”

You may be the one who built the fountains 50 years ago, or tried to shoot Jews last week in the Holocaust Museum in Washington, or you may be the ever-targeted Jewish person, or the one forced to drink from the other fountain—but at this moment, in this text, God in Jesus means for you to feel graciously pursued. God is seeking a gracious relationship with you. That’s what this well-scene means.