John Piper, in a sermon, “From Little Bethlehem Will Come a Ruler in Israel”(Micah 5)

But you, O Bethlehem Ephrathah,
who are too little to be among the clans of Judah,
from you shall come forth for me
one who is to be ruler in Israel,
whose coming forth is from of old,
from ancient days. 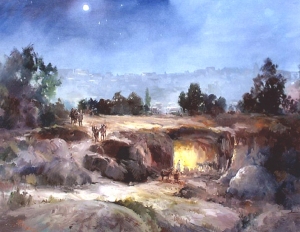 Bethlehem is scarcely worth counting among the clans of Judah, yet God chooses to bring his magnificent Messiah out of this town. Why? One answer is that the Messiah is of the lineage of David and David was a Bethlehemite. That’s true, but it misses the point of verse two. The point of verse two is that Bethlehem is small–not that it is great because David was born there. (That’s what the scribes missed in Matthew 2:6). God chooses something small, quiet, out of the way, and does something there that changes the course of history and eternity.

Why? Because when he acts this way we can’t boast in the merits or achievements of men but only in the glorious mercy of God. We can’t say, “Well, of course he set his favor on Bethlehem, look at the human glory Bethlehem has achieved!” All we can say is, “God is wonderfully free; he is not impressed by our bigness; he does nothing in order to attract attention to our accomplishments; he does everything to magnify his glorious freedom and mercy.”

The deepest meaning of the littleness and insignificance of Bethlehem is that God does not bestow the blessings of the Messiah–the blessings of salvation–on the basis of our greatness or our merit or our achievement. He does not elect cities or people because of their prominence or grandeur or distinction. When he chooses he chooses freely, in order to magnify the glory of his own mercy, not the glory of our distinctions. So let us say with the angels, “Glory to God in the highest!” Not glory to us. We get the joy. He gets the glory.