When Jesus saw him lying there and knew that he had already been there a long time, he said to him, “Do you want to be healed?”  The sick man answered him, “Sir, I have no one to put me into the pool when the water is stirred up, and while I am going another steps down before me.”  Jesus said to him, “Get up, take up your bed, and walk.”  And at once the man was healed, and he took up his bed and walked. John 5:6-9

John Piper, in a sermon,”Healed for the Sake of Holiness” 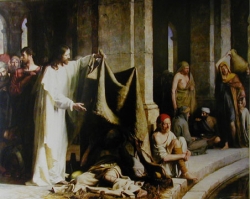 Jesus chooses to go to this pool. He did not have to. It didn’t sneak up on him. He didn’t stumble by. He knew what he was doing. He was going to this pool the same way he went to Samaria to find the woman at the well, and the same way he went to sign-seeking, prophet-dishonoring Galilee to find a kingly official who had a sick son. Jesus moves toward need, not comfort. Toward brokenhearted sinners, not the self-righteous.

Notice that when he asks the sick man in verse 6, “Do you want to be healed?” what the man said was not, “Yes.” Instead, he explains his tragic situation. Verse 7: “Sir, I have no one to put me into the pool when the water is stirred up, and while I am going another steps down before me.” Jesus asks no more questions. In response to that description of his sorrows, Jesus acts. Verse 8: “Get up, take up your bed, and walk.”

So it looks like this healing is not a response to anything religious or faithful about the man. It looks like Jesus healed him simply because his situation was so miserable for so long. In other words, it looks like it came from Jesus’ compassion, not the man’s faith or righteousness.

I counted at least nine times in the Gospels where it says Jesus was moved with compassion or pity. So not only does Jesus know you perfectly, but he is easily moved by the misery you feel. His therapies are not always what we want. But that’s not owing to his heartlessness. He is not heartless. He is compassionate to us in our misery. He is a sympathetic High Priest for those who will trust him.