Carrollton, Kentucky, was the site of one of the most deadly bus disasters in United States history. 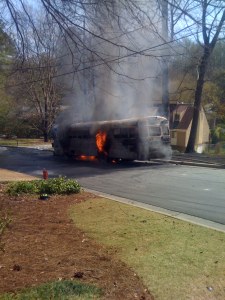 About 11:00 p.m.  on Saturday May 14, 1988, Larry Mahoney, a drunk driver in a pickup truck was traveling in the wrong direction on an interstate highway.  He collided head-on with a church youth group returning from a day at a theme park in their converted school bus. Upon impact, the ruptured fuel tank of the bus ignited, and the front loading door was blocked. Darkness and smoke made escape extremely difficult, considering there was only one exit, at the rear.  27 were killed, mostly teenagers.   34 were seriously injured. Only 6 passengers escaped without significant injury.

The drunk driver was injured, served a ten year sentence and is now free. Ecclesiastes 8:12 reminds us:

Though a sinner does evil a hundred times and prolongs his life, yet I know that it will be well with those who fear God, because they fear before him.

All around us we see injustice and trouble.  Ecc 8:12 reminds us of the age old question that has plagued the heart of man since the dawn of time: “Why do the righteous suffer while the wicked prosper?” The Bible has plenty to say about this:

This question is the focus of the book of Job.  Job’s “friends” believed that the righteous do NOT suffer.  So, they conclude that Job’s trials were actually the result of Job’s sins! Many people still have that opinion in our day, including those who say if you have enough faith you’ll never be sick.

It is also the focus of Psalm 73. Asaph is nearly to the point of giving up as he witnesses the prosperity of the wicked and the trials of the righteous.  “For I was envious of the arrogant when I saw the prosperity of the wicked. For they have no pangs until death; their bodies are fat and sleek.  They are not in trouble as others are; they are not stricken like the rest of mankind.”

Psalm 37 also deals with this problem, “Be still before the Lord and wait patiently for him;fret not yourself over the one who prospers in his way, over the man who carries out evil devices…Better is the little that the righteous has than the abundance of many wicked.  For the arms of the wicked shall be broken, but the Lord upholds the righteous.”

We need to see the eternal perspective.  Jesus said in John 16:33, “I have said these things to you, that in me you may have peace. In the world you will have tribulation. But take heart; I have overcome the world.”

Martha Tennison, mother of one of the survivors, writes at the Pentecostal Evangel:

We still have to trust God. He’s in charge. He’ll see us through. That’s the truth we must lean upon. We can’t dwell on the why and allow ourselves to get depressed over the why because there’ll never be an answer to that. The hope we have is that one day the trumpet is going to sound. Those precious young people who died in that bus tragedy, and every other believer in Christ who has already gone on, will rise first. And then we who are alive and remain will meet the Lord together in the clouds of the air. Isn’t that a wonderful thought? And that’s the hope that keeps us going. The only way that we survive is through Him, the only Way.