“Am I in the place of God? You intended to harm me, but God intended it for good to accomplish what is now being done, the saving of many lives” Genesis 50:19-20

D. A. Carson says in “For the Love of God, Volume 1, Feb 17 that we should reflect on what Joseph does not say. 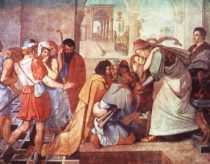 He does not say that during a momentary lapse on God’s part, Joseph’s brothers sold him into slavery, but that God, being a superb chess player, turned the game around and in due course made Joseph prime minister of Egypt.

Still less does he say that God’s intention had been to send Joseph down to Egypt in a well-appointed chariot, but unfortunately Joseph’s brothers rather mucked up the divine plan, forcing God to respond with clever countermoves to bring about his own good purposes.

This is a common stance in Scripture. It generates many complex, philosophical discussions. But the basic notion is simple. God is sovereign, and invariably good; we are morally responsible, and frequently evil.

2 thoughts on “God intended this”