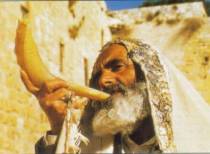 Recall that the blast of trumpet is an important redemptive historical image throughout both testaments.

It is not until the seven trumpet judgments are completed that the great city falls–just as Jericho did when Israel’s priests sounded the seven trumpets. Only then will God’s people enter the true promised land, that city whose architect and builder is the Lord God himself. Like the seven seals, when the seven trumpet judgments have run their course, the city of man will be destroyed and the kingdoms of this world will become the kingdom of our God and of his Christ. And all of this results–John tells us–because God hears the prayers of his suffering saints. When the prayers of his people ascend to his throne, God acts.

One thought on “Trumpets and Final Triumph”