Think Ezekiel has been difficult? Hang in there! You are in good company. According to the ESV Study Bible, almost all interpreters agree that Ezekiel 40–48 is one of the most difficult passages in the entire Bible.

From the ESV Study Bible comments on Ezekiel 40-48 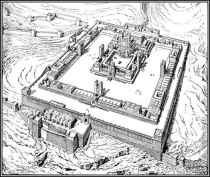 With regard to the meaning of this passage as a whole: (1) Some interpreters understand this vision as a prophecy that will be fulfilled literally, with a rebuilt temple and Israel dwelling in the land according to its tribes—a future millennial kingdom on the earth (see notes on Rev. 20:1–6). Many who hold this position believe that literal animal sacrifices will be offered, but that in the future millennial kingdom they will function as reminders of the complete and sufficient death of Christ, a function different from what they had in the OT. (2) Other interpreters see this vision of a new temple and a renewal of the land of Israel as an extended, detailed metaphor predicting the presence of God among his people in the new covenant age (that is, his presence in the church). (3) Another view is that the vision predicts God’s presence among his people in the new heavens and new earth (cf. Isa. 66:17; 2 Pet. 3:13; Rev. 21:1), not as physical details that will be literally fulfilled but as symbolic indications of the great blessings of that future age. In this interpretation, the details about worship and sacrifices are symbols of the centrality of worship of God: the temple represents the orderliness and beauty of God’s heavenly dwelling place; the priests and their sacrifices represent the service and worship of all God’s people; the division of the land represents the allocation of places to live for all God’s people; and the river represents the outward flow of God’s blessings to his people forever. (4) Finally, it is possible that there are both literal and symbolic elements in this vision, and that, as with the visions in Ezekiel 1, this vision describes future realities that cannot be fully expressed in terms of Ezekiel’s present realities. Almost all interpreters agree that Ezekiel 40–48 is one of the most difficult passages in the entire Bible.

No matter which interpretation one adopts, certain primary emphases are quite clear. The whole vision may be understood as describing the actual presence of God within the temple of the new community: chs. 40–42 prepare for it; ch. 43 realizes it; chs. 44–46 provide the rules for it; ch. 47 describes its effects; and ch. 48 lays out access to it. The vision thus also presupposes threads and themes of earlier oracles: the supremacy of God; the requirements necessitated by his holiness; revitalization by the Spirit of God; honoring God by living in accord with his holiness; and ensuring the sanctity of the community by maintaining divine justice.

2 thoughts on “Need a little help reading through Ezekiel?”