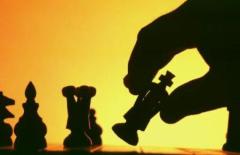 2 Chron. 18:28–34 Ahab is enticed into battle, as the spirit had promised (v. 20). His decision to disguise himself, while rather cynically directing Jehoshaphat to wear his royal robes, indicates his dominant role in the alliance and perhaps also represents a contrived attempt to evade Micaiah’s word of doom. But events turn out the opposite of what Ahab intended: Jehoshaphat is delivered in battle as a consequence of his desperate prayer (v. 31b, and the Lord helped him; God drew them away from him is the Chronicler’s own addition to the text; see note on vv. 1–2), while Ahab dies from an apparently random arrow (v. 33), clear evidence of God’s sovereign direction of events.

One thought on “Checkmate: God’s sovereign direction of events”