If you were Paul, and you had been rejected by your own people, God’s chosen people, the Jews, and you had risked your life to witness to them, only to be beaten, and now imprisoned, there would be much cause for despair. But things were still to get worse. While the Lord was speaking with Paul, some of the Jews were speaking with each other, and the result was a conspiracy to kill Paul. More than forty Jews bound themselves to a solemn oath. They covenanted together that they would neither eat nor drink anything until they had put Paul to death. They had enough of trying to do away with Paul through the legal means. If they could not kill him due to Roman intervention, and due to the chaos in the council, they would kill him through intrigue. 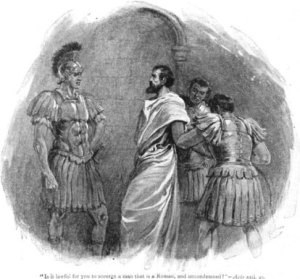 The conspiracy was not merely the evil plot of a handful of evil men; it was a plan which won the approval and the participation of the leaders of the Sanhedrin. In order for this scheme to work, the leaders of the Sanhedrin would have to cooperate, convincing the commander of the Roman troops to release Paul for yet another trial before the Council. On the way to the Council, the forty or more men would see to it that he never made it alive. They would thus finally be rid of Paul. There is now little effort to retain the appearance of righteousness or legality. They would kill Paul any way they could.

The “Watergate mentality” has been with us since the beginning of time. It reasons that the cause is so important, and the danger so great, that any means is acceptable to rid the cause of that which threatens it. The cause, was not the law of God, nor justice, but the preservation of the power and position of these leaders. They were tired of the threat which the gospel posed to them, especially as boldly proclaimed by Paul.

On the surface, it would appear that Paul was really in danger now. Things seems to be going from bad to worse. But this is only the appearance of things. In reality this conspiracy is Paul’s ticket for a safe departure out of Jerusalem. It is also his next step toward Rome, although some time will yet pass before he arrives there.

It was no “coincidence” that Paul’s nephew just “happened” to be there when these conspirators met, and to overhear their plans. Providentially, this young man was given access to Paul, and then was received and taken seriously by the commander. How kind and gentle this Roman commander was. How cruel and cunning were these Jews. The chosen people of God were about to commit murder, while this pagan was about to take strong measures to protect the life of the apostle, and to indirectly help to promote the gospel!

The commander was not about to lose a prisoner to the Jews. He would take strong measures to assure Paul’s safe exodus from Jerusalem. He was intent on Paul having a fair trial. If the Jews had cast aside justice and the Old Testament law, this Roman soldier was following Roman law to the letter, giving Paul every benefit of the doubt and every privilege that was due a Roman citizen. And so he ordered two hundred soldiers, seventy horsemen, and two hundred spearmen to escort Paul safely to Caesarea, where he was to be handed over to the custody of Felix the governor, to stand trial there. The left shortly, traveling in the darkness to Antipatris, a city about half way (about 35 or 40 miles) to Caesarea.

The letter which Claudius Lysias wrote to Felix was a brief account, not altogether complete, accurate, or in the proper sequence of events. It was written in a way that reports usually are, so that the one writing the report is viewed in the best light. Nevertheless, the letter was reasonably accurate. Of particular interest is the fact that the commander indicated in very clear language, Paul’s innocence: “I found him to be accused over questions about their Law, but under no accusation deserving death or imprisonment” (verse 29). Why, then, did the commander not release Paul, if he knew him to be virtually innocent? Because he knew that the Jews would kill Paul, and that Paul’s rights, as a Roman citizen, would thus be violated. He felt obligated to keep Paul alive. On the other hand, if he turned Paul loose, there was a strong likelihood of another civil disturbance. Every time Paul and these Jews met the sparks flew and a riot inevitably seemed to commence.

What a sigh of relief the commander must have breathed, to have Paul a fair distance from Jerusalem and his area of responsibility. Felix, on the other hand, summoned Paul and discerned that he was in his jurisdiction, and so he summoned the Jews and prepared to conduct yet another trial when they arrived. This was not to be the last trial, either.

To read the rest of the article, click here:

3 thoughts on “A conspiracy to kill Paul”