C. H Spurgeon on Psalm 8 at The Treasury of David:

We may style this Psalm the Song of the Astronomer: let us go abroad and sing it beneath the starry heavens at eventide, for it is very probable that in such a position, it first occurred to the poet’s mind. Dr. Chalmers says, “There is much in the scenery of a nocturnal sky; to lift the soul to pious contemplation. That moon, and these stars, what are they? They are detached from the world, and they lift us above it. We feel withdrawn from the earth, and rise in lofty abstraction from this little theatre of human passions and human anxieties. The mind abandons itself to reverie, and is transferred in the ecstasy of its thought to distant and unexplored regions. It sees nature in the simplicity of her great elements, and it sees the God of nature invested with the high attributes of wisdom and majesty.” 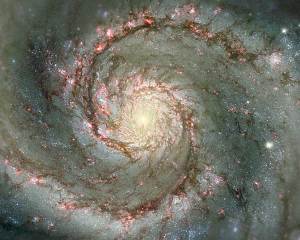 O Lord, our Lord,
how majestic is your name in all the earth!
You have set your glory above the heavens.
Out of the mouth of babies and infants,
you have established strength because of your foes,
to still the enemy and the avenger.

When I look at your heavens, the work of your fingers,
the moon and the stars, which you have set in place,
what is man that you are mindful of him,
and the son of man that you care for him?

Yet you have made him a little lower than the heavenly beings
and crowned him with glory and honor.
You have given him dominion over the works of your hands;
you have put all things under his feet,
all sheep and oxen,
and also the beasts of the field,
the birds of the heavens, and the fish of the sea,
whatever passes along the paths of the seas.

O Lord, our Lord,
how majestic is your name in all the earth!