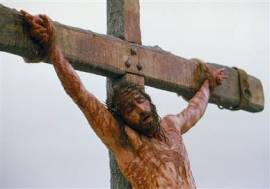 We read that when He was crucified, His first words were, “Father, forgive them, for they know not what they do.” His own racking agony of body did not make Him forget others. The first of His seven sayings on the cross was a prayer for the souls of His murderers.

The fruits of this wonderful prayer will never be fully seen until the day when the books are opened, and the secrets of all hearts are revealed. We have probably not the least idea how many of the conversions to God at Jerusalem which took place during the first six months after the crucifixion, were the direct reply to this marvelous prayer. Perhaps this prayer was the first step towards the penitent thief’s repentance. Perhaps it was one means of affecting the centurion, who declared our Lord “a righteous man,” and the people who “smote their breasts and returned.” Perhaps the three thousand converted on the day of Pentecost, foremost, it may be at one time among our Lord’s murderers, owed their conversion to this very prayer. The day will declare it. There is nothing secret that shall not be revealed. This only we know, that “the Father hears the Son always.” (John 11:42.) We may be sure that this wondrous prayer was heard.

Let us see in our Lord’s intercession for those who crucified Him, one more proof of Christ’s infinite love to sinners. The Lord Jesus is indeed most pitiful, most compassionate, most gracious. None are too wicked for Him to care for. None are too far gone in sin for his almighty heart to take interest about their souls. He wept over unbelieving Jerusalem. He heard the prayer of the dying thief. He stopped under the tree to call the tax-collector Zaccheus. He came down from heaven to turn the heart of the persecutor Saul. He found time to pray for His murderers even on the cross. Love like this is a love that passes knowledge. The vilest of sinners have no cause to be afraid of applying to a Savior like this. If we want warrant and encouragement to repent and believe, the passage before us surely supplies enough.

2 thoughts on “Our gracious Intercessor”