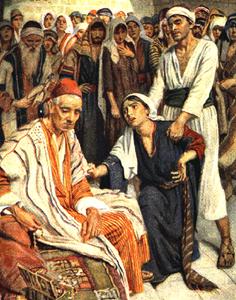 A widow comes to an unjust judge and pleads for help. She is being oppressed unjustly and wants him to use his authority to seek her relief. That’s us, the widow. Weak, poor, and no husband to speak up for us. Her only source of help, the judge. Our only source: God. She comes again and again until he gives her the help she needs just to get her off his back. But the argument of the parable is not that if you can wear out an unjust human judge, then you may stand a chance of wearing out God so that he helps you just to get you off his back. That would contradict Luke 12:32 where Jesus says, “Fear not, little flock, for it is your Father’s good pleasure to give you the kingdom.”

The second mark of the judge was that he had “no regard for man.” The widow was unknown to him, and he had no interest in her. The assumption is that if he cared about this widow, if she were his mother, he would help her. So we must ask: Does God have no regard for us? Is he indifferent to our needs? In verse 7 Jesus gives us the answer: “And will not God vindicate his elect?” Disciples of Jesus are not in the category of strangers to God. They are his elect. He has chosen them. He has set his favor on them. He has adopted them to be his children. As Paul says in Romans 8:31–33, “If God is for us, who is against us? . . . Who shall bring any charge against God’s elect? It is God who justifies.” There is no condition of man more precious to be conceived than to be chosen by God. It means he has set his favor upon us fully and freely. He is for us with all his might. Therefore, Jesus argues, if an unjust judge can be moved by persistent petitions to help a stranger for whom he has no regard, how much more “will God help his own chosen ones who cry to him day and night!”

One thought on “Piper: Everything hangs on God being different from this judge”