In light of recent predictions of the end of the world and the rapture, many people just roll their eyes when they hear talk of “the coming of Christ”  In Luke 2, we read of someone who had been eagerly waiting a lifetime to see Jesus.

John Piper, in a sermon from Luke 2, “Preparing to Receive Christ: Looking For the Consolation of israel”

God prepares a person to receive Christ by stirring up a longing for consolation and redemption that can come only from Christ.

In Relation to the First Coming 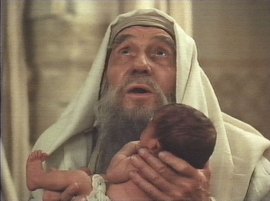 We can see in this text that this was true of his first coming—Simeon and Anna were longing for the consolation and redemption of God’s people, and they were granted the privilege of recognizing and receiving the Christ into their arms.

In Relation to the Second Coming

And we can see the same truth in relation to Christ’s SECOND coming to complete the redemption he began about 1,986 years ago. For example in Hebrews 9:28 it says, “So Christ, having been offered once to bear the sins of many, will appear a second time, not to deal with sin but to save those who are eagerly waiting for him.”

Paul said something very similar in 2 Timothy 4:8, “Henceforth there is laid up for me the crown of righteousness, which the Lord, the righteous judge, will award to me on that Day, and not only to me but also to all who have loved his appearing.”

And Peter turns it into a command: “Set your hope fully on the grace that is coming to you at the revelation of Jesus Christ” (1 Peter 1:13).

So I think we can say that not only in relation to the first coming of Christ, but also in relation to the second coming, it’s true that God prepares us to receive Christ by stirring up a longing for consolation and redemption that can come only from Christ. Simeon and Anna saw Christ and welcomed him because they were longing for his coming and his redemption. They knew that was Israel’s only hope. The same is true for professing Christians today: we will welcome Christ at his coming if we love his appearing and eagerly await the consummation of his redemption.

2 thoughts on “Are you eagerly waiting for Jesus’ coming?”