John Piper, in a sermon, “How Not to Talk to an Angel” 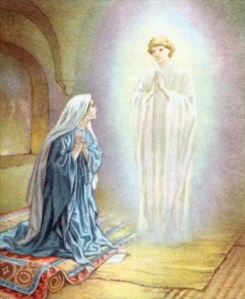 Evidently what Luke wants to do with this pattern is get the reader to compare and contrast Jesus and John the Baptist. For example, both children are announced in advance by the angel Gabriel (1:11, 28); both births are unnatural or miraculous; in both cases the angel tells what the name should be (1:13, 31), and so on. But even more important than the similarities are the contrasts. John was born to an aged and sterile woman, Jesus was born to a virgin; John was given a name which means “God is gracious”; Jesus was given a name which means “savior”; John was to prepare for the Lord, Jesus was the Lord who would reign forever.

In this way Luke helps Theophilus and us to see two important truths. One is that God is uniquely at work in the birth of these two men. This is the all important thing for Theophilus to see about the history of Jesus: it originates with and is guided by the sovereign God. It was not easy for a Roman official to believe that a poor Jewish teacher, executed as a criminal, is in fact the Son of God. That such a man could be an eternal king and savior of the world was very hard for Theophilus to accept. So Luke starts at the beginning to show that this man and his forerunner were no ordinary people: the sovereign God ordained and ordered their births and their destinies.

….But the second thing this pattern teaches is that Jesus is far greater than John the Baptist.

You will have to click here to read the rest of the sermon, “How Not to Talk to an Angel”

One thought on “The sovereign God ordained and ordered their births and their destinies.”