For you know the grace of our Lord Jesus Christ, that though [because] he was rich, yet for your sake he became poor, so that you by his poverty might become rich. 2 Corinthians 8:9

What is the relationship between Jesus’ riches and His becoming poor?

The usual translation of this phrase is: “Though he was rich, he became poor”

But now let’s try substituting the ideas we have seen as we have understood Jesus’ riches and poverty: “Though he was loved by His father, he became a slave and died on the cross” This doesn’t make sense as an example of giving – it doesn’t fulfill the purpose of the sentence: to explain why we should give as the Macedonians gave. The sentence is true, and would make sense as a statement of the Father’s love; indeed, we could restate John 3:16 this way: “Though God loved His one and only Son, he gave him up, so that whosoever believes in him should not perish but have everlasting life.”

But do you see why this doesn’t make sense in the context of 2 Corinthians 8? “Though he was rich he became poor” makes sense if we think of poverty and riches in the same currency. In that case, being rich is the opposite of being poor, and we don’t expect rich people to choose to become poor.  But given our interpretation of “rich” and “poor”, and given the context of the sentence, that translation doesn’t make sense.

So are we all wrong?  No. Rather, the traditional translation of this is wrong.  In the letter Paul wrote to the Corinthians in Greek, there is no word for “though.” Instead, the verb translated “though he was rich” is simply a participle, and thus is ambiguous. We could capture that ambiguity in a more literal translation this way: “For you know the grace of our Lord Jesus Christ, that for you he became poor being rich, so that you by his poverty might become rich.” 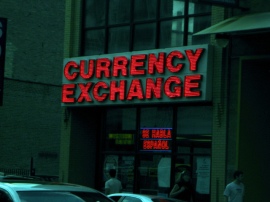 It only says that he: “became poor being rich”.  This grammatical construction can mean “though”, but it can also mean “because”. And when we take the meaning “because” and add the idea of being rich and poor in different currencies, the verse makes perfect sense: “For you know the grace of our Lord Jesus Christ, that for you he became poor in one currency BECAUSE he was rich in another currency, so that you by his poverty might become rich in that same currency.”

You see why this makes sense?  If you have millions of US dollars, you don’t mind becoming poor in British pounds.  If Jesus has the honor of being the Son of God, he can endure the loss of becoming man, of dying on the cross – knowing that He will be restored to the Father’s side and will bring great glory to God…..

Let us fix our eyes on Jesus, the author and perfecter of our faith, who for the joy set before him endured the cross, scorning its shame, and sat down at the right hand of the throne of God.

“For the joy set before Him.” He knew the cross would result in the glory of God, and that He would be at His father’s side for all eternity – that He would then present to Himself the church in all her glory as His perfect bride, to bring glory to God for all ages.  So having those riches, because He was rich, He became poor in another sense – and brought us into those same riches.

To read the rest of the sermon by Coty Pinckney, “The Rich Became Poor for You”, click here

One thought on “Lessons in currency exchange”