Mark 6:45-56, our passage for today, contains the section telling of Jesus walking on water:

Immediately he made his disciples get into the boat and go before him to the other side, to Bethsaida, while he dismissed the crowd. And after he had taken leave of them, he went up on the mountain to pray. And when evening came, the boat was out on the sea, and he was alone on the land. And he saw that they were making headway painfully, for the wind was against them. And about the fourth watch of the night he came to them, walking on the sea. He meant to pass by them, but when they saw him walking on the sea they thought it was a ghost, and cried out,  for they all saw him and were terrified. But immediately he spoke to them and said, “Take heart; it is I. Do not be afraid.” And he got into the boat with them, and the wind ceased. And they were utterly astounded,  for they did not understand about the loaves, but their hearts were hardened. 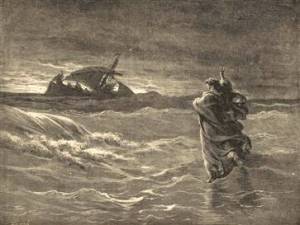 After they saw him, Jesus replied in such a way to allay their fears and let them know that they had not seen some sort of apparition, but that their master had indeed come to rescue them. Knowing their fear, “Immediately [Jesus] spoke to them and said, `Take courage! It is I. Don’t be afraid.’” While these words can mean nothing more than “it is I, Jesus,” very likely these words mean much, much, more. Every Jew knew from memory the famous words from Exodus 3:14, in which YHWH spoke to Moses from the burring bush, saying “I am that I am.” These are the words Jesus applied to himself in John 8:58, which caused many who heard him to pick up rocks to stone him, since for Jesus to use these words of himself would amount to blasphemy, if Jesus were not God in human flesh.

The Jews of Jesus’ day were also quite familiar with the words from Isaiah 41:4  “Who has done this and carried it through, calling forth the generations from the beginning? I, the LORD -with the first of them and with the last—I am he.” When coupled with the other words Jesus spoke to them, “take courage” and “do not be afraid” Jesus is clearly affirming words known to be spoken by YHWH in the Old Testament as though he (Jesus) has full authority to do so. While the disciples were terrified, Jesus consoles them with the familiar words of YHWH–“it is I.”    Clearly, Jesus is making an implied, if not an overt claim to be YHWH.  The one who had previously commanded the sea, now walks on it.    Despite all that they had witnessed Jesus say and do, this was too much for them to grasp and so they are frightened when they need not be.

One thought on “These words mean much, much, more.”