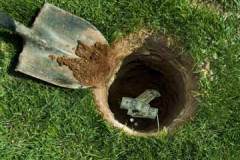 “For it will be like a man going on a journey, who called his servants and entrusted to them his property. To one he gave five talents, to another two, to another one, to each according to his ability. Then he went away. He who had received the five talents went at once and traded with them, and he made five talents more. So also he who had the two talents made two talents more. But he who had received the one talent went and dug in the ground and hid his master’s money. Now after a long time the master of those servants came and settled accounts with them….But his master answered him, ‘You wicked and slothful servant! You knew that I reap where I have not sown and gather where I scattered no seed?  Then you ought to have invested my money with the bankers, and at my coming I should have received what was my own with interest. So take the talent from him and give it to him who has the ten talents.  For to everyone who has will more be given, and he will have an abundance. But from the one who has not, even what he has will be taken away.  And cast the worthless servant into the outer darkness. In that place there will be weeping and gnashing of teeth.’

To hide our talent is to neglect opportunities of glorifying God, when we have them.

all, all are alike burying their Lord’s money in the ground. They have all light that they do not use. They might all be better than they are. But they are all daily robbing God. He has lent them much and they make Him no return. The words of Daniel to Belshazzar, are strictly applicable to every unconverted person–“the God in whose hand your breath is, and whose are all your ways, you have not glorified.” (Dan. 5:23.)