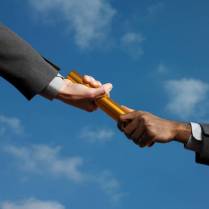 From Through the Bible Radio with J. Vernon McGee:

Joshua was the successor to Moses. He was a great general. Born a slave in Egypt, he was forty years old at the time of the Exodus out of Egypt. He was eighty years old when he received his commission as Moses’ successor and one hundred ten years old at his death. Joshua had already gained prominence during the wilderness wanderings. When they were attacked by the army of Amalek, it was Joshua who organized the men into an army that fought off Amalek. Joshua served as a minister or servant to Moses. References to him in that connection reveal his loyalty to Moses and his devotion to God. At Kadesh–barnea he was one of the twelve men who went to spy out the land of Canaan. He is one of the two spies that returned with a favorable report in full confidence that God would give them the land.

Joshua’s name means “Jehovah saves.” The same word in the New Testament is Jesus. Joshua was a man of courage, dependence upon God, faith, leadership, enthusiasm, and fidelity. He is a type of Christ in his name and in his work. As another has said, “Joshua shows that a man of average ability may become a leader in the church. Joshua received his call not in flaming letters written across the sky, but from an older man who knew God and knew Joshua, and saw that he was fitted by God to be a leader.”