John Piper, in a sermon Toward the Tithe and Beyond: 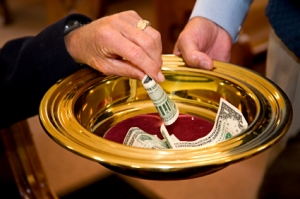 Some of God’s people are called not to do moneymaking business in the ordinary ways. They are called to be pastors and ministers and missionaries and ministry assistants, and so on. The rest of God’s people (call them “lay ministers”) are to be gainfully employed and support the “vocational ministers”—and the costs of that ministry. In the Old Testament God laid down that this be done by tithe.

If the question is raised whether Jesus, in the New Testament, continued this principle for the sake of his church, one of the strongest arguments that he did is Matthew 23:23 where he says,

Woe to you, scribes and Pharisees, hypocrites! For you tithe mint and dill and cumin, and have neglected the weightier provisions of the law: justice and mercy and faithfulness; but these are the things you should have done without neglecting the others.

So Jesus endorses tithing: don’t neglect it. It is not as essential as justice love and mercy; but it is to be done.

2 thoughts on “Does Jesus endorse tithing?”