John Piper, in “Justification by Faith Establishes the Law,”

…What the moral law of God requires of us, we will do, if we pursue it by faith, as those who are already justified, and not by works, in order to be justified. If we get right with God first by faith alone, and then live in that freedom of love and acceptance and justification, we will be changed from the inside out and will begin to love the very things the moral law requires so that they become established in our lives – not as works of merit, but as the fruit of faith (I Thessalonians 1:3; 2 Thessalonians 1:11) and the fruit of the Spirit.

Ascend the Tracks of the Roller Coaster 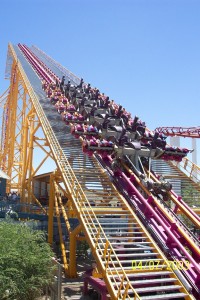 Now before I show you why I think this is what it means, let me put it in a picture for you. Children, you listen closely here, because you know about roller coasters better than I do. Suppose that you are standing on the tracks of a roller coaster at the very bottom of one of the deepest dips with a three-hundred-foot tall incline in front of you, almost straight up. At the top you see the roller coaster cars perched and ready to go down the other side of the incline. And suppose someone – call him Mr. Moses – says, “Ascend those tracks. Go up to the top of this roller coaster hill on these tracks.” And suppose he says, “If you get in the roller coaster at the top, you will ride all afternoon with all the momentum you need to keep you going.”

So you start to climb the tracks, hand over hand, plank by plank, between the rails, when suddenly you hear another man – call him Mr. Paul – saying, “Wait, don’t do that. These tracks and planks aren’t made for climbing like that. Come over here on the ground and listen to my advice.” Now at this point, certain bystanders might interrupt and say, “Hey, Mr. Moses said they must ‘ascend these tracks’ – that’s his law. He said, ‘Go up to the top of this roller coaster hill on these tracks.’ Now here you are telling them to get off the tracks and come to you on the ground. You are going to ruin their afternoon. You are nullifying Mr. Moses’ law.”

Be Lifted to the Top

But Mr. Paul says, “No, no. That’s not what is happening. Come I will show you. We are not canceling Mr. Moses’ law, we are fulfilling it – the only way it can be fulfilled.” Then he points you to a crane with a long cable and a harness at the end of the cable. And he points to a man sitting way up in the cab of this crane probably 400 feet in the air. He waves and smiles. And Mr. Paul says, “Let me put this harness on you. And if you will trust the man in the cab and the cable and the harness, he will lift you all the way up and put you in the roller coaster car. I promise you it is much safer this way.”

So you consider, and then you trust him and he lifts you in the harness all the way up and puts you in the roller coaster. Then the roller coaster starts to roll. As it builds speed on the descent, you feel not only the force of gravity, but a tremendous surge of power kick in on the ascent. You go all the way around the roller coaster circuit and then you come down into the dip where you had been standing and where you had started to climb. You hit the bottom of that dip doing about eighty miles an hour and surge up the very rails you thought you had to climb. And you keep on going. 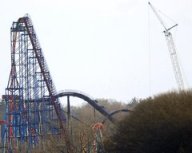 You look down and you see Mr. Moses and Mr. Paul with their arms on each other’s shoulders like the best of friends, smiling as if there never had been any tension at all.

The Law is a Track, not a Ladder

Now what’s the point? The point is that when Mr. Moses said, “Ascend these tracks . . . Go up to the top of this roller coaster hill on these tracks,” he meant what he said. That’s what the Law requires. But it wasn’t his idea that you would try to climb them hand over hand, plank by plank. That’s not what the planks are for. This is not a ladder with railings to climb. This is track for power to ride. So it is with the moral law in the Old Testament. It isn’t meant to give a ladder for climbing, but a track for riding in the power of the Holy Spirit.

So when Mr. Paul came along and said, “Don’t climb those tracks to the top. Come over here to this harness,” some thought he was saying, “Leave the law of Mr. Moses; nullify the path of the commandments.” But that is not what he was doing. He was not nullifying the commandments; he was establishing them. The commandment was, “Ascend these tracks. Go up to the top of this roller coaster hill on these tracks.” And that is exactly what happened when you trusted the man in the cab to lift you to the car and set you to rolling with a power not your own. You came around and you did “ascend those tracks.” And you did “go up to the top of this roller coaster hill.” Mr. Paul’s message about getting to the top by faith alone without climbing (apart from works of the Law) did not nullify the commandments of Mr. Moses. In fact, that message of faith established the commandments.

To listen to or read the rest of the sermon, click here:

2 thoughts on “Law, faith and riding the roller coaster”