But you are a chosen race, a royal priesthood, a holy nation, a people for his own possession, that you may proclaim the excellencies of him who called you out of darkness into his marvelous light. (1 Peter 2:9)

John Piper, in a sermon “Christian Identity and Christian Destiny”

Therefore being a Christian and making the greatness of God known are almost identical. We can do it in church services with preaching and singing and praying and reading. We can do it in our small groups as we tell each other what God has been for us, or what we need him to be for us. We can do it at work as we tell people what we love about God and why we think he is great. And we can do it in a thousand different ways of love that suit our situation and personality.

The Story of Doug Nichols 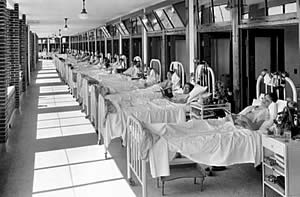 For example, I’ll close with this wonderful story of how Doug Nichols, the International Director of Action International Ministries, made the excellencies of God known in a tuberculosis sanitarium in India in 1967—he was a missionary with Operation Mobilization and got TB. He was in the sanitarium for several months. He tried to give tracts and copies of the gospel of John away, but no one would take them. They didn’t like him and assumed he was a rich American.

At one point for several nights he would wake up coughing at 2 AM. He noticed a little old emaciated man trying to get out of bed. The man couldn’t stand up, and began to whimper. He lay back into bed. In the morning the stench in the ward was terrible and everyone was angry at the old man for not containing himself. The nurse who cleaned up even smacked the old man for making such a mess.

The next night the very same thing happened. Doug woke up coughing with his own terrible sickness and weakness. He saw the old man try again to get out of bed. Again he couldn’t stand, and began to cry softly. Doug got out of bed went over to the old man. The man cowered with fear. But Doug picked him up with both arms and carried him to the bathroom which was just a hole in the floor, and then brought him back. The man kissed him on the cheek as he put him down in bed.

At 4 AM another patient woke Doug with a steaming cup of tea and made motions that said he wanted a copy of the booklet—the gospel of John. Through that whole day people kept coming to him and asking for his booklets even though he could not speak their language.

2 thoughts on “What is the meaning of our identity?”