John 1:51 And he said to him, “Truly, truly, I say to you, you will see heaven opened, and the angels of God ascending and descending on the Son of Man.”

In this strange passage, Jesus is calling to mind the picture from Genesis 28 where Jacob has a dream and sees angels going up and down on a ladder. 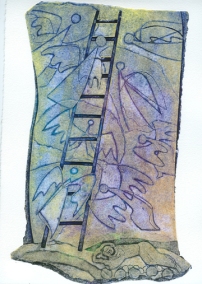 And he dreamed, and behold, there was a ladder set up on the earth, and the top of it reached to heaven. And behold, the angels of God were ascending and descending on it! And behold, the Lord stood above it and said, “I am the Lord, the God of Abraham your father and the God of Isaac. The land on which you lie I will give to you and to your offspring. . . . Behold, I am with you and will keep you wherever you go. . . . For I will not leave you until I have done what I have promised you.” Then Jacob awoke from his sleep and said, “Surely the Lord is in this place, and I did not know it.”

What helps me understand the significance of the angels going up and down in John 1:51 is that neither in John 1 nor in Genesis 28 is a single word spoken to explain what the angels were doing. It doesn’t say why they were going up and down. It seems to me, therefore, that what John has done is simply capture the whole incident from Genesis to say two things. One is that Jesus is the decisive, final connection between heaven and earth. In John 1:51, the angels are going up and down on the Son of Man, not on a ladder. And the other is to say Jesus is the place where people now meet God. Jacob called that place Beth-el—“house of God”—because he said, “Surely God is in this place.”

Where God and Man Meet

Now Jesus is the new Beth-el. He is the place where God is present. Heaven has opened, and Jesus has appeared. And from now on, Jesus will be the place where God appears most clearly among men, and where men find their way into fellowship with God. There are no holy geographic places any more designated by God as his meeting place with man. Jesus is that meeting place.

Jesus was saying to Nathanael, “If you follow me, you are going to see far greater manifestations of my divine glory than what you just saw. I am the final, decisive link with heaven. Both upward and downward.” When we move heavenward, we move on the Son of Man. When God moves earthward, he moves on the Son of Man.