Paul’s closing line in Colossians is “I, Paul, write this greeting with my own hand. Remember my chains. Grace be with you.” 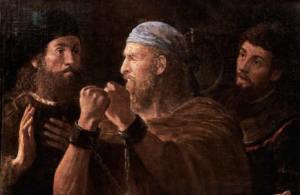 ….But why call on them to “remember” his “chains”? Certainly he’s not asking for pity. The last thing he wanted was for them to shift their focus from the sufficiency of Christ to the suffering of his servant. Still, it was important that they (and we) not forget where devotion to Jesus will often lead: to suffering, to loss of freedom, to oppression and the end of convenience and comfort, but never to despair!

I suspect that this request is his way of asking for their continued intercession on his behalf. He doesn’t explicitly ask that they pray he be released, but I’m certain he would have welcomed the opportunity to move about freely yet again and share the gospel in those regions where it had not been heard. In any case, he rejoices in his suffering (Colossians 1:24) and is faithful to redeem even this season of incarceration for the sake of the mystery of Christ (see Philippians 1:12-18).

Make no mistake, the chains were real, not figurative. Could the fact that Paul wrote only this one final verse be an indication that his hands were shackled and chafed, making any attempt to write particularly painful?

His words here remind me of his exhortation to young Timothy: “Do not be ashamed of the testimony about our Lord, nor of me his prisoner, but share in suffering for the gospel by the power of God” (2 Timothy 1:8). And again, he commends Onesiphorus because “he often refreshed me and was not ashamed of my chains” (2 Timothy 1:16).

Perhaps Paul was concerned lest the Colossians recoil in their commitment to him and above all to Christ because of the embarrassment his imprisonment might evoke. Few people talk openly (and proudly) about a friend or family member who is in jail! It’s not a topic for dinner parties or over coffee at Starbucks.

Paul knew the pressures they faced, the fear of rejection they felt, together with the appeal of riches and personal comfort that assaulted them on a daily basis. But they must resist the temptation to think that imprisonment for Christ’s sake is a disgrace. “Remember my chains! Rejoice in them! Redeem the pain they inflict for the greater glory of our Lord!”

And may the “grace [of God] be with you!” Let me remind you of Paul’s inaugural blessing in Colossians 1:2 – “Grace to you and peace from God our Father.” To make sense of what would otherwise appear as a simple, standard greeting, I cited the words of John Piper. I can do no better than to quote him again, and thus bring our meditations in this marvelous epistle to an end. At the beginning of his letters, writes Piper,

“Paul has in mind that the letter itself is a channel of God’s grace to the readers. Grace is about to flow ‘from God’ through Paul’s writing to the Christians. So he says, ‘Grace to you.’ That is, grace is now active and is about to flow from God through my inspired writing to you as you read – ‘grace [be] to you.’ But as the end of the letter approaches, Paul realizes that the reading is almost finished and the question rises, ‘What becomes of the grace that has been flowing to the readers through the reading of the inspired letter?’ He answers with a blessing at the end of every letter: ‘Grace [be] with you.’ With you as you put the letter away and leave the church. With you as you go home to deal with a sick child and an unaffectionate spouse. With you as you go to work and face the temptations of anger and dishonesty and lust.With you as you muster courage to speak up for Christ over lunch. . . . [Thus] we learn that grace is ready to flow to us every time we take up the inspired Scriptures to read them. And we learn that grace will abide with us when we lay the Bible down and go about our daily living” (Future Grace, 66-67).

Grace be “with” you,

To read the rest of the commentary on Colossians 4, click here-

One thought on “Chains and grace”