Henry Law, 1797-1884, was a teacher/preacher in the evangelical party of the Church of England and a prolific writer, including this wonderful nugget from The Gospel in the Pentateuch, found at “Grace Gems!” 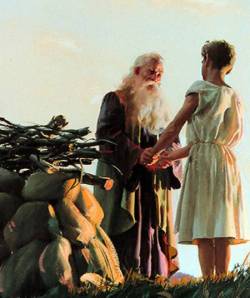 For three days Abraham journeyed towards the appointed mount. This was large opportunity for unbelief to whisper many a dissuading thought. This was long time for the father’s heart to ache. He looks on his child, and there is agony. He looks up to his God, and the agony melts into the calmness of unruffled peace. He turns to his child, and his foot would sincerely falter. He turns to his God, and the step is firm in resolute resolve.

Reader! faith is a persevering and unflinching grace. It holds fast by the Word—so it holds on—so it holds out. But now every fiber of affection is wrung by the simple inquiry of his confiding Isaac, “My father, behold the fire and the wood, but where is the lamb for a burnt offering?” None can tell the anguish of such a moment, for none were ever pierced by such an arrow, but it laid open the recesses of his heart, only to show how faith there reigned. Abraham answered, “God Himself will provide the lamb for the burnt offering, my son.”

Here is faith in its simple element of trust, and in its single consistency of acting. It totters not. Its stand is as a giant’s stand on earth: because its head towers above the skies, gazing upon God. It leaves the time, the place, the means, the method, the all to Him. So it goes forward. It knows that God’s leadings lead to God’s glory. And God’s glory is its happy paradise. It was so. Isaac is bound. And must he really die? Faith stops not to inquire. He is laid upon the altar. The hand is stretched out. The knife is taken. The last moment has come. But the last moment is the fit time to crown faith with reward, and victory, and peace. The voice which bade, now forbids. He who said, “Take your son,” arrests by saying, “Lay not your hand upon the lad.”

Behold God’s wondrous way. His word is honored. Faith triumphs, and is honored too. It is tried, and by the trial is confirmed and expanded. The patriarch now begins a new life of heavenly joy. For the joy of Isaac born is nothing to the joy of Isaac restored. A giving God was love in the highest. A restoring God is love in higher heights.

One thought on “Henry Law: A restoring God is love in higher heights.”