When I was with you day after day in the temple, you did not lay hands on me. But this is your hour, and the power of darkness.” —Luke 22:53 ESV 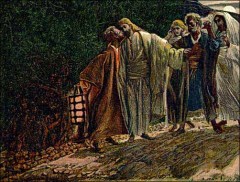 …the time during which evil is permitted to triumph is fixed and limited by God. We read that our Lord said to His enemies when they took Him, “This is your hour and the power of darkness.”

The sovereignty of God over everything done upon earth is absolute and complete. The hands of the wicked are bound until He allows them to work. They can do nothing without His permission. But this is not all. The hands of the wicked cannot stir one moment before God allows them to begin, and cannot stir one moment after God commands them to stop. The very worst of Satan’s instruments are ‘working in chains’. The devil could not touch Job’s property or person until God allowed him. He could not prevent Job’s prosperity returning, when God’s designs on Job were accomplished. Our Lord’s enemies could not take and slay him, until the appointed “hour” of His weakness arrived. Nor yet could they prevent His rising again, when the hour came in which He was declared the Son of God with power, by His resurrection from the dead. (Rom. 1:4.) When He was led forth to Calvary, it was “their hour.” When He rose victorious from the grave, it was His.