When there are many words, transgression is unavoidable,

but he who restrains his lips is wise. —Proverbs 10:19 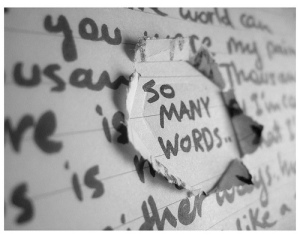 This is such an interesting verse. It is a verse that serves as one of the foundational principles when it comes to understanding the Biblical doctrine of language, in general, and the use of the tongue, in particular. I say this is an interesting verse because Solomon doesn’t say what we might expect him to say. He doesn’t say “when there are many bad or hurtful or hasty or negative words, transgression is unavoidable, he simply writes that when there are “many words,” transgression is unavoidable. This should tell us something about communication immediately; it should tell us that much talk tends to result in a negative outcome. Our words, when they are prolonged, tend to degenerate in character and that means that transgression is always a potential product. We are sinners, let’s remember, and our depravity most quickly manifests itself, I believe, in our words. So, as Solomon warns, if we speak many words, we run the risk of causing problems.

I like the way the NKJV translates this verse: “In the multitude of words sin is not lacking” Because of our fallen natures, if we speak a lot, we are going to sin. This is a simple formula that Solomon sets before us. Consequently, the second half of this verse makes complete sense: “but he who restrains his lips is wise.” If, because of our sin natures, much talk is likely to produce transgression, then the man who wants to please the LORD and not cause offense with his words will be the man who governs his mouth. Much talk leads to sin, so less talk eliminates the opportunity for sin.

Let’s consider some of the vocabulary Solomon uses in this verse. First, there is the word “transgression” (pesha). What exactly does Solomon mean when he says that when there are many words, transgression is unavoidable? This term is a basic Hebrew word meaning “trespass” or “sin.” There’s no mystery here. Solomon says that many words lead to sin-that is, the violation of some aspect of God’s Word. In fact, you’ll notice, he says that sin is unavoidable when we speak many words. The phrase Solomon uses refers to something that cannot be stopped, something that must occur given a set of circumstances. In this case, sin is that which cannot be stopped or that which must occur when this circumstance-many words-is present.

Using antithetical parallelism, Solomon sets before us the opposite of speaking many words: “but he who restrains his lips is wise.” Here, the word translated “restrains” (chasak), of course, is significant. This term means “to spare, to keep back, to withhold, to hinder, to hold in check.” This notion is clear enough. This word describes an act of self-discipline or self-control by which the words that are spoken are few and do not, therefore, lead to transgression. At this point, we might think back to our study on self-control. I noted in that portion of our examination of this book that self-control was not only about keeping our tempers; it is also about the exercise of restraining oneself in ways that may not be directly related to anger.

Solomon teaches that the preferred alternative to the use of many words is the use of controlled speech. If speech is controlled, and we’re talking about quantity as well as quality, we are less likely to commit a sin with our tongue. Therefore, since avoiding anything that violates God’s will is a chief mark of a wise man, Solomon pronounces that man who governs his mouth as “wise.”

This is, once again, a foundational verse because it deals with words, in general, not just “bad” words or inflammatory words. This text warns us that if we talk too much, we are going to sin-and I would point out that Solomon says nothing about our motives or our sense of justification for speaking many words. He flatly warns us that if we talk a lot, we are going to sin and he says that this outcome is unavoidable. Only a fool will hear what Solomon says in this verse and think he is immune or think he can still talk much about people or circumstances without falling into sin. It cannot be done. If we take this verse seriously, we should be people of measured speech; we should be people who are known for their reserve when it comes to talking.